Artificial Intelligence (AI) has been justifiably reaping its share of headline space lately – but it’s scarcely a new concept. In theory it appears analogous to 21st century science fiction, but its roots actually date back to the second century AD.

In ~ 150 AD, Heron – the celebrated Greek mathematician and engineer – designed and constructed mechanically / pneumatically operated men and self-operating machines known as automatons.  Similar to robots, they were designed to follow a predetermined set of instructions, yet acted as if they had a mind of their own. A subset of these devices were said to have been installed in temples to perform a range of tasks from the humble pouring of wine to rather disingenuously performing “magical acts of the gods” to win over skeptics within the congregation.

But we digress… automata was a very 2nd century innovation. And it has moved ahead significantly, since.

The concept of AI became prevalent enough and so closely linked to the potential of the 21st century that the eponymously titled film, directed by Steven Spielberg in 2001, was overwhelmingly embraced at movie houses around the world.  The concept was simple, especially in human terms. A technologically advanced -robotic boy yearns to earn the love of his human mother by becoming “real.”

Fast forward to the present. Countless businesses have ripped a page from Heron’s techno playbook by adapting his design as a powerful social interface on the Internet of Things. Late last year I penned a piece regarding the rampant use of “chatting” as a highly effective and functional way for business communication. Furthering this conversational concept, chatbots (chat robots) have not only become the popular kids in town but are saving businesses millions of dollars.  These chatbots, which simulate human conversation by leveraging A.I. technology, perform a multitude of human customer service tasks.

Businesses have gotten the message that this is an important and innovative tool not to be disregarded.

According to Business Insider (BI), “Foreseeing immense potential, businesses are starting to invest heavily in the burgeoning bot economy. A number of brands and publishers have already deployed bots on messaging and collaboration channels, including HP, 1-800-Flowers, and CNN.”  Their graph, below, illustrates the powerful financial impact of chatbot use across various services offerings. 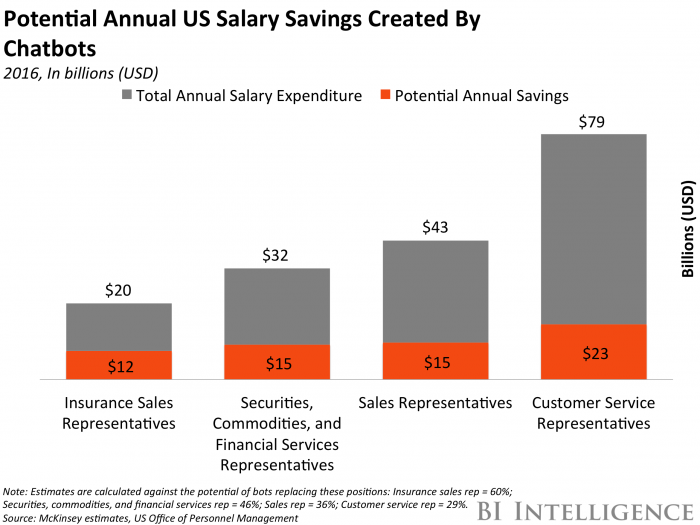 For those of us in Supply Chain Management, A.I. delivers more than chatbots.  A recent article from Supply Chain World outlined the impact A.I. will have on future supply chains. They cite a paper, written by Dr. Hokey Min from the College of Business at Bowling Green State University, who adroitly predicted the applicability of A.I. to several aspects of SC Management. Among these applications that have come to fruition are setting inventory safety levels, demand planning and transportation network design.

How about beyond the supply chain?

The Wall Street Journal published a comprehensive piece on how artificial Intelligence is transforming the workplace in general.  Details on the impact this technology will have on management and employees can be found here.