Highlighting the remarkable and industrious members of the Zenith Group –a chapter of the Women Presidents’ Organization – continues with our fifth in a series of six. I am honored to present Gina Addeo, CEO of ADCO Electric Corporation. 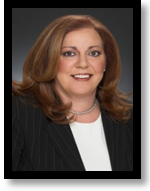 What: Over 7 million people. That number represents, on average, the number of people residing in New York City over the past 20 years. Then consider this: Gina Addeo, CEO of ADCO Electrical Corporation was the first woman in NYC to be granted a Master Electrician’s license.

Founded on Staten Island, New York in 1977 by a single businessman, Richard Addeo – father of Gina – the business has expanded exponentially. Thirty-nine years later, under the leadership of Ms. Addeo, ADCO has grown to be one of the oldest and most distinguished firms in New York City providing services in NYC, Connecticut, Long Island and Westchester County.

But first, a bit of history.

Several years after graduating from Stevens Institute of Technology, from which she received the Distinguished Alumni Award in 2013, Addeo founded GMA Electrical Corporation whose first assignment was providing services for the New York/New Jersey Port Authority at the World Trade Center.  Not long after, Addeo segued into the position of co-owner and CEO of ADCO.

ADCO provides a wide range of services including, but not limited to, fiber optic and data communications installation, integrated lighting and control systems, and structured cabling and network services. Supported by 600 skilled electricians and over 100 administrative staff members, ADCO provides 24×7 on call service to their clients.

But Addeo’s realm of expertise is not limited to running ADCO.  She is very involved both industry and community activities.

Addeo was the first woman appointed to the position of President of the New York City Chapter of the National Electrical Contractors Association (NECA). She also serves as Secretary of the Joint Industry Board of the Electrical Industry, a large labor-management organization affiliated with IBEW Local Union #3 that brings the electrical industry together with electrical contractors.

Overcoming Obstacles: Through the years, Addeo has discovered that when confronted with challenges and obstacles, hard work and her intimate knowledge of the electrical business have been her best tools for overcoming hurdles. Additionally, Addeo believes she is in a unique position as a woman in a predominantly male industry and considers it a competitive advantage.

Encouraging Words from Gina: “Inspirational words I like to communicate to others are from my Alma Mater, Stevens Institute of Technology, whose motto is “Per Aspera Ad Astra” – through adversity to the stars.”

This is the fifth in a series and we are pleased to be presenting these exceptional leaders.