Good, better or best?  Higher or lower, faster or slower, effective or ineffective?  Whether it is comparative or superlative, how can businesses best gauge their performance against key competitors?

According to WebFinance’s reference site, BusinessDictionary.com, benchmarking is “a measurement of the quality of an organization’s policies, products, programs, strategies, etc., and their comparison with standard measurements, or similar measurements of its peers. The objectives of benchmarking are (1) to determine what and where improvements are called for, (2) to analyze how other organizations achieve their high performance levels, and (3) to use this information to improve performance.”

Benchmarking is a handy tool allowing businesses to attain their strategic goals. Comparative results may be used to close those pesky performance gaps (the delta between where you are and where you want to be) and critical capability gaps (process steps you should be executing but are not).

Seemingly improbable to imagine, the idea of measuring comparative performance, i.e., benchmarking, commenced as recently as the 1970s – although one wonders if craft beer brewers weren’t comparing malt recipes centuries ago.

While reverse engineering might arguably be considered a precursor to the modern benchmarking process, multiple sources indicate that corporate benchmarking most notably began with Xerox, the inventor of the photocopier.  Facing fierce competition from lower production costs copiers imported from Japan, the American company recognized a need for action.

Functions, such as development, quality and distribution, across their enterprise were compared to leading businesses both within and outside their industry.  After identifying and  deploying best practices, the results were startling. Xerox experienced:

According to Total Quality Management, “By the company’s own admission, it would probably not be in the copier business today if it were not for benchmarking.” 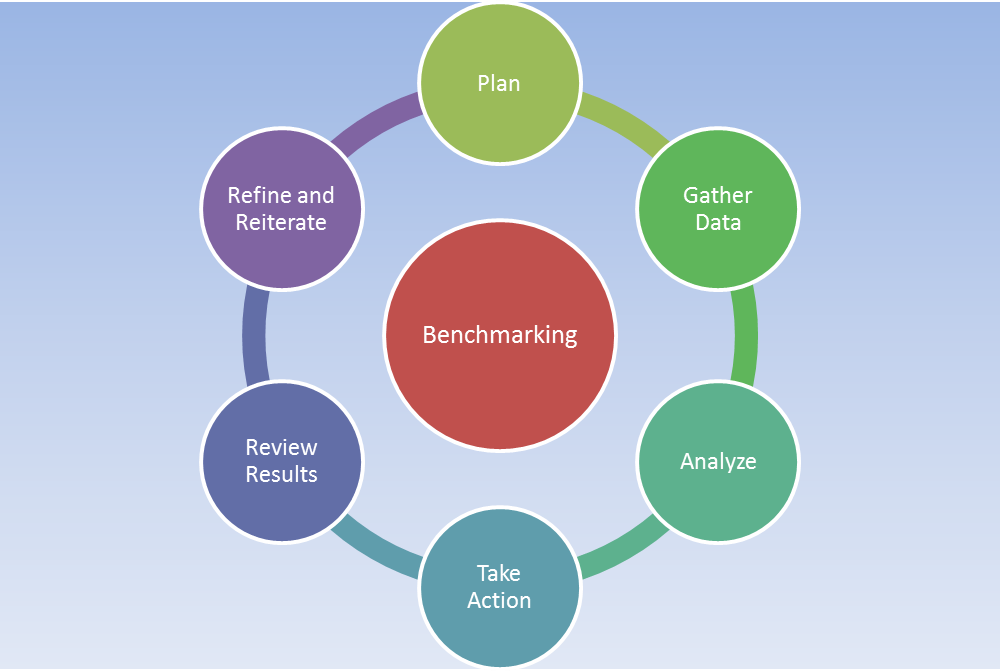 The attached graphic, courtesy of BAWiki (a reference and blog for business analysts) might be an oversimplified representation of the benchmarking process Xerox executed, but the objective, regardless of executed steps, should be same: to emulate high-performing best practices companies at optimal cost.   The recent exponential explosion of big data and data analytics tools facilitates the requisite data collection, analysis and reporting of benchmarking, purportedly making benchmarking more dynamic and swiftly implementable.

SDI is a firm believer and regular practitioner of benchmarking methodologies. For example, our Procurement Process Outsourcing (PPO) offering has developed meaningful reporting tools that benchmark program health in real-time, allowing our teams to react to any potential issues or negative trending. Resulting reports can be customized to reflect our clients’ specific commodity codes and subcategories for greater procurement visibility and analysis.

For further reading on the Xerox story…

Prophets in the Dark: How Xerox Reinvented Itself and Beat Back the Japanese Hardcover –  by David T. Kearns