These are 3 among many key dates in women’s history. In 1776 soon-to-be first lady Abigail Adams requests that her husband, John, “remember the ladies” as they were framing the Constitution; 1849 saw Elizabeth Blackwell become the first woman to achieve a medical degree in the United States and in 1920, after a lengthy struggle, the passage of the 19th amendment guaranteed all American women the right to vote.

Although these represent only a few of many critical milestones in women’s history, it is clear woman have been a force to be reckoned with for centuries.  While the gathering statistics to measure the participation rate of women in business is relatively new, historical references indicate women have been playing an increasingly pivotal role for years.

It also appears domesticity may have hampered women’s contribution to business. In the Smithsonian education archives, Regina Blaszczyk, Assistant Professor of History and American Studies, Boston University argues, “For many decades, women’s roles in business and in the workforce were defined by cultural notions about women’s appropriate role in society. The “cult of domesticity” that shaped American thought beginning in the early nineteenth century dictated that women’s proper place was the home.”

But not for long. Blazczyk continues to point out that by the 1920’s there was a remarkable increase in women’s contribution to business as both entrepreneurs and workers. This period is often associated with the rise of big business, which helped to transform the United States into one of the world’s most vibrant economies.

Fast forward to the 21st century and, according to a 2014 United States Department of Commerce’s Census Bureau report, the state of women owned businesses looked particularly rosy. WBEs (Women-owned Business Enterprise) not only own 7.8 million business but they accounted for 28.7 percent of all business in the U.S.

Although many indicators point to robust growth in WBEs, it begs the question,” What is happening in Florida?”

A recent article in the Sun Sentinel  stated “growth of businesses owned by women has dwindled dramatically in South Florida since the recession, falling far behind the national pace.” Citing the markedly disproportionate impact from the recession as a possible cause for slow growth, Florida business owners remain optimistic that soon to be release census data will signify the resurgence of growth in the region.

Nationwide, the influence of WBEs rapidly continues to expand. The embedded graph from the soon to be widely released “2015 State of Women-Owned Businesses” estimates that there are nearly 9.5 million women-owned businesses in the U.S., producing nearly $1.5 trillion in revenue. These businesses employ close to 8 million people. 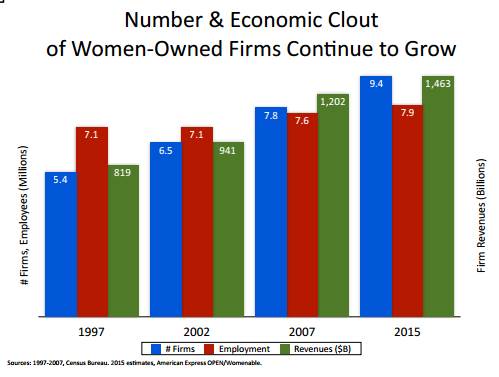 This report is collaboratively published through the efforts of American Express OPEN and Womenable.

SDI looks forward to the full report, which will further underscore the criticality of women’s businesses and anticipates an even rosier 2016.